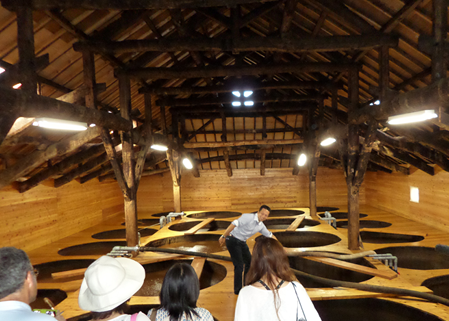 ... is made from soybeans, wheat, water and salt with the help of the mushroom aspergillus oryzae through fermentation. There are five main categories of soy sauce: koikuchi, usukuchi, shiro, tamari, and saishikomi. They differ in terms of ingredients through their proportion of wheat and soybeans and the brewing method:

... is the most widespread soy sauce in Japan with a dark brown color and lots of umami and taste. It is made from wheat and soybeans. Well-known brands are e.g. Kikkoman and Yamasa.

... is a little lighter in color and milder in taste. The salt is less integrated and is therefore more prominent than with Koikuchi soy sauce. Their basic ingredients are also wheat and soybeans.

... is mainly produced from wheat and only a small amount of soybeans. It is very light in color and is therefore often used as an ingredient where umami is added, but the color of the dish (such as sashimi) should not be too dark. It is therefore very suitable as an ingredient in European dishes, which are given more complexity by the umami without immediately taking on a typically Japanese note. It is also marketed under the name of white soy sauce.

... is mainly made from soybeans without wheat. It is very dark and has a very strong aroma. If it doesn't contain any wheat at all, it's gluten-free.

... is a double-brewed soy sauce. The basis is a ready-made (Koikuchi) soy sauce in which the same ingredients are brewed again. The fermentation time is therefore longer overall than with the other simply brewed soy sauces. The flavor of Saishikomi soy sauces is very complex.

How much umami do the various Japanese soy sauces have?

Umami is created by the breakdown of proteins into amino acids in the course of fermentation. The strongest umami component in soy sauces is the amino acid called glutamate. Their proportion varies with the different soy sauces.

Examples from our range:

Note: The umami values given are averages and have not been analyzed or calculated for the individual soy sauces offered.

There is no such thing as the best Japanese soy sauce in and of itself. The choice depends on the one hand on personal taste and on the other hand on what the soy sauce is to be used for. In Japan, too, the tastes in the regions are very different. The soy sauces in the various categories have their origins in different regions and are preferred in their homeland. In the south of Japan, in Kyushu, sweet soy sauces are particularly popular.

Which soy sauce to use for what?