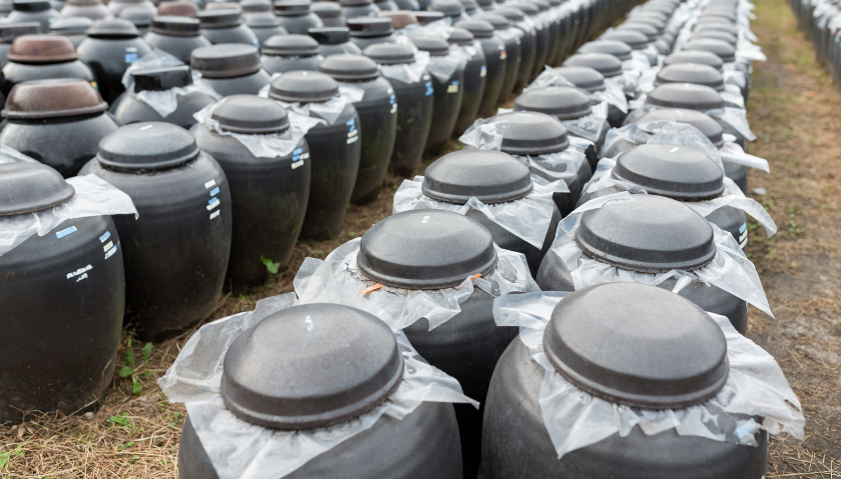 Japanese rice vinegar and other vinegars

The majority of Japanese vinegars are made from rice and are called KOMEZU rice vinegar. They are usually milder than European vinegars and can therefore be used wherever a mild acidity is required. At the same time, rice vinegar is also more aromatic than the majority of European vinegars. Modern, inexpensive Japanese vinegars, however, can also contain grain, which leads to a significantly weaker aroma and stronger acidity.

A distinction is made between the following vinegar categories:

... based on unpolished brown rice. The taste of the vinegar is more complex and stronger than polished rice.

... "Black vinegar" is made from brown rice or barley and fermented over a very long period of time - one to three years. It is very dark in color and has its very own aroma.

... is made from Sake Lee (also called Sake Kasu). Sake Lee are the solids that are left over after sake production. This vinegar is reddish in color and has a lot of aroma.

... is a sushi vinegar to which salt and sugar have been added, so to speak, a spiced rice vinegar. As the name suggests, it is used in particular to prepare sushi. But it can also be used for dressings or as an ingredient for sauces.

... is a grain vinegar, it is very light with a rather weak aroma. It is mainly used for marinades.

And which rice vinegar does Japanese sushi masters use for sushi?

Every sushi master has his personal preferences. Some use seasoned rice vinegar, some take a grain vinegar and season it themselves according to their own ideas. Still others vary in the sushi vinegar depending on the fish it is. Many 3-star sushi masters in Tokyo use an Akasu, which brings a lot of umami with it without the addition of spices via a special fermentation.